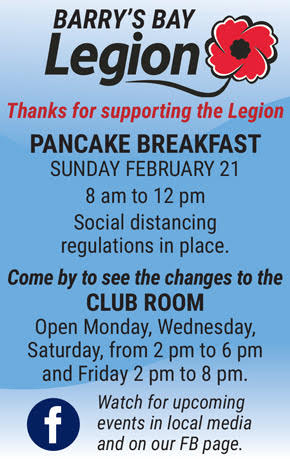 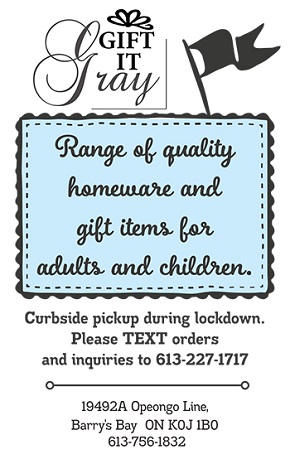 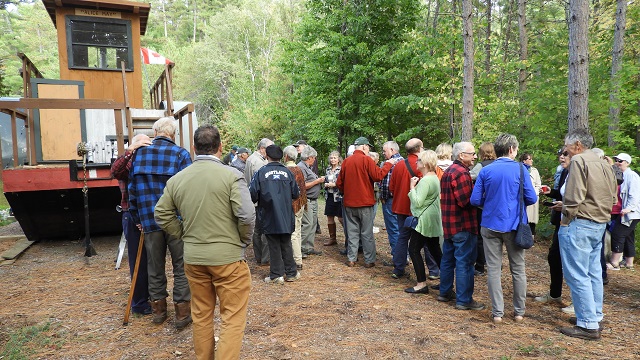 The Alice May was christened in a ceremonial ‘launch’ at Shaw Woods on September 27, 2019 during National Forest Week by Bonnie Eldridge, Tom Pender and John Yakabuski, Minister of Natural Resources and Forestry. The boat has come to rest in a forest because she is a replica of an Alligator Warping Tug Boat, a steam-powered boat designed for use in the logging industry and built by the West & Peachey Company in Simcoe from 1889 to the 1930s. The Alice May is one of just three Alligators in Ontario (the other two are in Simcoe and in Algonquin Park). 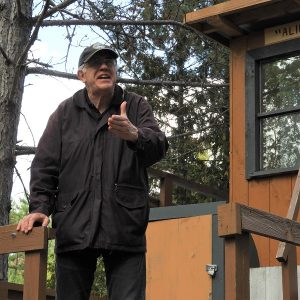 The late Dr. Bill Burwell, respected doctor from Renfrew and keen aficionado of all types of steam-powered machinery, built the Alligator with his wife, Bonnie, and a team of dedicated steam enthusiasts. It was his wish that the Alice May be donated to the Shaw Woods Outdoor Education Centre to illustrate to visitors this interesting element of Canadian forest history. She is named after the derelict boat in Robert Service’s poem The Cremation of Sam McGee. The audience at the naming ceremony was treated to an abbreviated version of the poem delivered from the deck of the Alice May by Conrad Boyce (inset), who plays the title role of Fred Meilleur in this year’s Stone Fence Theatre show Up at Fred’s – Allons-y!

Fred Blackstein acted as emcee for the afternoon. After introducing Boyce’s recitation he called on Dave Lemkay to speak about the book Alligators of the North and the display of the WD Stocker from Simcoe at the Pembroke Airport for Expo 150. Lemkay said at that point Burwell became inspired to build an Alligator. He remembered the launch of the boat at Red Pine Bay in September 2017 and thanked Peter and Barb Haughton who have safeguarded the Alligator at Haughton’s Bay until now.

Blackstein read greetings from Lake Laberge, Yukon: “Congratulations on your acquisition of the Alice May as MLA for Lake Laberge and a resident [of] her shores for over 35 years I am pleased to hear that the spirit of Robert Service’s famous poem The Cremation of Sam McGee is remembered through the preservation of the new Alice May in Ontario at the Shaw Woods. May her retirement be easy and her troubles few. [signed] Best wishes, Brad Cathers, MLA for Lake Laberge.”

Blackstein introduced the key players who worked to realize Burwell’s 2009 dream to build an Alligator, starting with Burwell’s widow, Bonnie Eldridge, and Tom Pender (the original registered owners of the Alice May who sold it to Shaw Woods for $1 each). Eldridge spoke about her late husband’s collection of steam machinery and annual steam show at the family farm. She acknowledged his team who worked on the Alligator, “They were called MAD – and they were all mad – but it stood for Madawaska Alligator Dreamers. Soon enough, almost four years later, they had the end result. I’m sure Bill would be extremely happy to have [it] here because what he liked to do was have a good time, provide education and have people socialize, and bring something from over a hundred years of historic value in Valley development from lumbering to what we have today.” Pender acknowledged the MAD team, reminisced about their research and visit to see the William M Alligator in Algonquin Park, and thanked them along with Shaw Lumber, the Shaw Family, and the board of Shaw Woods Education Centre. 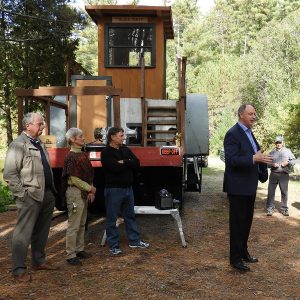 Minister John Yakabuski said, “This is National Forest Week…. I see members of the Shaw family are here and none of this would be possible without their generosity many years ago. What better place to celebrate National Forest Week and what better way than to have one of the most integral illustrations of Canadian ingenuity which is just a tremendous part of our forestry heritage and our logging heritage.… To be able to be here today to be part of the christening of this is something that I take great pride in as the Minister of Natural Resources and Forestry, because forestry is what really built the Ottawa Valley.” 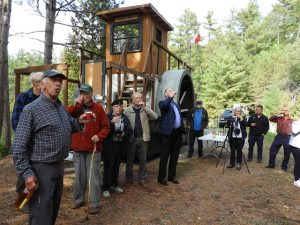 Unlike the launching of ocean liners, champagne was not used to christen the Alice May. Instead, Blackstein explained, in honour of the Robert Service connection to the Yukon, the Alice May would be christened with a bottle of Yukon Jack, “the black sheep of liqueurs.” All present were invited to join in a toast to the late Dr. Bill Burwell after the ceremonial smashing of the whiskey liqueur bottle. A toast to Dr. Bill Burwell (inset)

Video below shows Fred Blackstein (left) as the Alice May is christened by Tom Pender, John Yakabuski, Bonnie Eldridge. 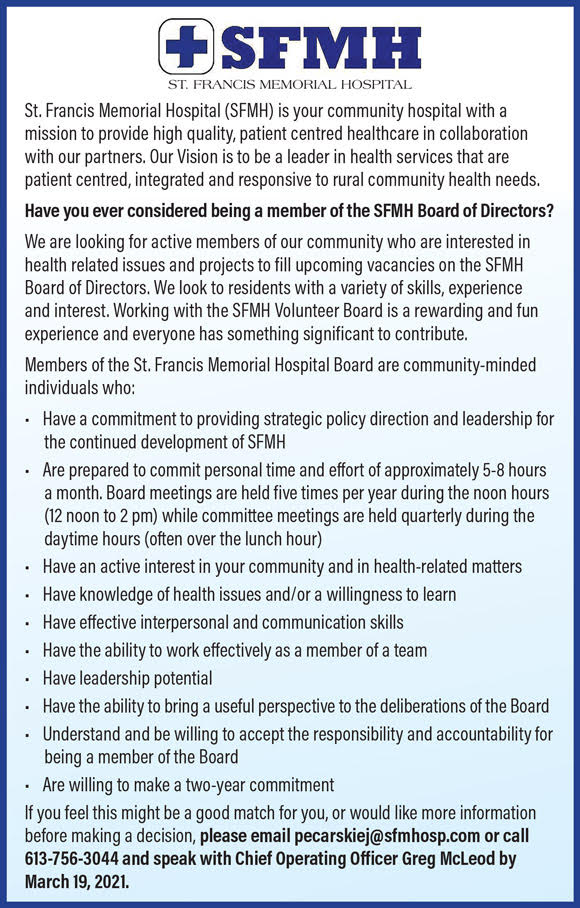 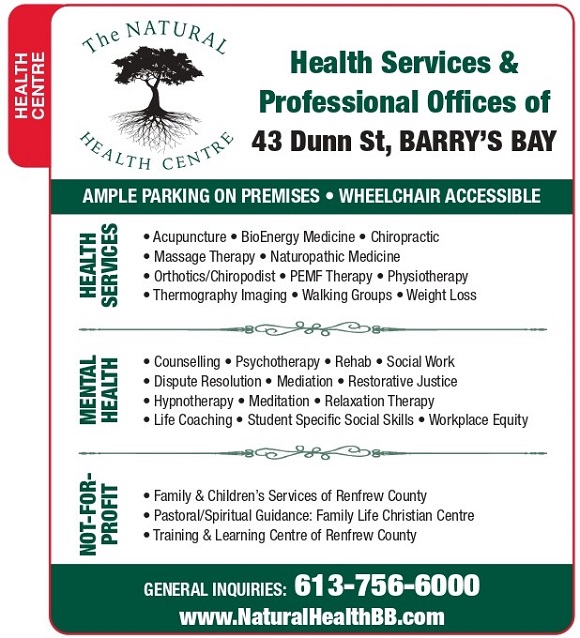