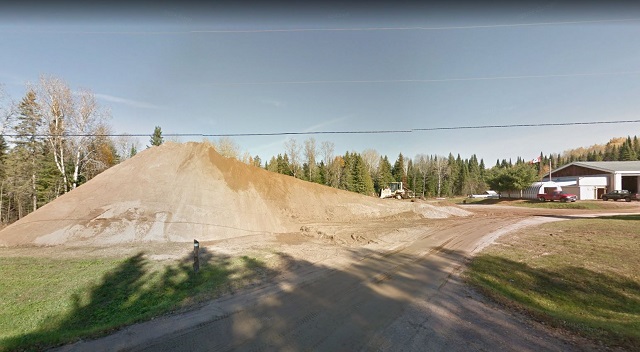 When Brudenell Lyndoch and Raglan (BLR) resumed its Council meeting begun on September 2nd and continued a week later, one of the agenda items was the approval of accounts. These included a Roads Account voucher in the sum of $273,892.71 part of which related to the supply of gravel, which amounted to $75,538.24. Councillor Trevor Lidtkie began by questioning the method of calculation to arrive at the figure of 2,204 tons for materials used on Little Ireland Road. Lidtkie was also concerned that there was no breakdown as between the gravel amount and the cost of trucking. Charlie Behm, Road Superintendent, participated in the meeting by telephone and explained that the amount was measured by “the bucket loads” and said that this had been done in the past. Above BLR Quadeville Road yard. Photo googlemaps.

Councillor Andrea Budarick, referring to the fact that the total bill was over $75,000, stated, “I don’t care if it’s been done for thousands of years, I just don’t think it’s the right way to do it. And especially if you would normally have tendered for this.”

Budarick then asked Behm why the contract was not tendered. He replied, “Well, we discussed that at a meeting a while back.” Budarick asked him to confirm that it was agreed that it would not be tendered, pointing out that it was her understanding that “when we need to purchase something if it’s of a certain amount of money, then we’re supposed to tender. Is that not correct?”

What Budarick was referring to is the fact that, as is required by law, municipalities must have in place a procurement policy which sets out procedures that must be followed according to the amount of money that is being spent. BLR’s Purchasing By-Law, which was passed in 2004, recites the purpose of it as follows:

“1.1 The purpose of this policy is to set out guidelines for the municipality to ensure that all purchases of materials, supplies and services provide the lowest costs consistent with the required quality and service.

“1.2 An open and honest process shall be maintained that is fair and impartial.

“1.3 The purchasing policy will promote and maintain the integrity of the purchasing process and protect Council, vendors and staff involved in the process by providing clear direction and accountabilities.”

For example, the by-law stipulates that purchases in excess of $2,000 and up to $4,000 shall require a minimum of two written quotations. It goes on to state, in Section 4.2.1, “Purchases in excess of $4,000.00 up to and including $50,000.00 may be tendered by invitation. A minimum of five (5) invitations must be requested. However, the tender shall be open, with all tenders accepted and considered. In the case that five invitations, for whatever reason, cannot be requested, the process of obtaining less than five (5) tenders must be authorized by Council.” Further, Section 4.3.1 states: “Purchases in excess of $50,000 shall be open and advertised.”

During further questioning, Budarick asked, “So what is our checks and balances, then? Did I miss something? I don’t remember coming to the Council table to say … this project needs to be done, do we do a tender? And being asked that question. Did I miss that? Were we asked that question?”

Councillor Iris Kauffeldt interjected, “Not that I recall.”

It seems clear therefore that there was no tendering process put in place for the Little Ireland Road contract and also for a similar project the previous year. Budarick had asked Behm whether the contractor who did the work the year before had an understanding that he would be doing the Little Ireland Road project as well. She asked whether in 2019 the contractor tendered for both jobs and Behm answered, “No.”

Later, after Council had finished discussing other matters on the agenda, Councillor John Rutledge asked, “Could we back up just one second, on this sand and gravel bit?” to which Mayor Sheldon Keller replied, “No, that’s been discussed…. Bring it up at the next meeting.”