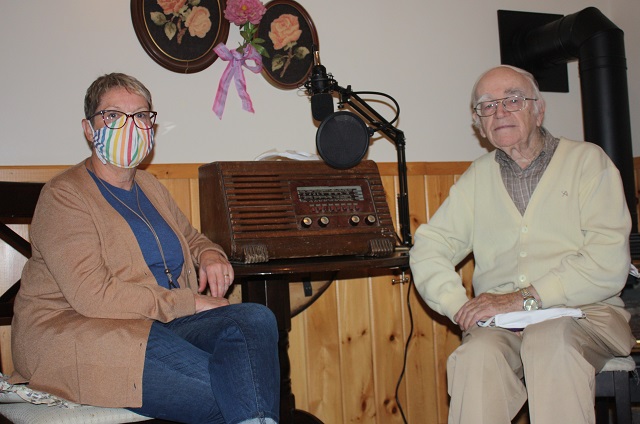 If grandma or grandpa knows an interesting story about the good old days of anyone who lived within 50 kilometers of Barry’s Bay during the past century, it could be worth hundreds of dollars to some lucky grand-niece or nephew still in school.

“We’ve had an amazing time this past summer,” said Stationkeeper MV President Joanne Olsen. (Above, left, with Bill Goulet. photo supplied) “Those old stories of days gone by have become all the rage up here and have been wildly driving up our listenership on The Opeongo Line, a podcast produced here to celebrate local heritage and culture and which is now gaining more than 300 new listeners each month.”

Olsen said The Opeongo Line recently did a show on Eganville native, 80-year-old Bill Goulet who spent much of his life in Barry’s Bay. Goulet was interviewed by Martina Coulas, a University of Toronto student from Wilno who was trained this past summer by The Stationkeepers to collect oral histories from local senior citizens. She digitally recorded over 15 hour-long interviews in the Barry’s Bay area that included Mr. Goulet who was one of the first to be podcast. On October 4th, the Opeongo Line released its most recent oral history show, one involving Julia Lorbetskie, a Barry’s Bay native nearly 101 years of age.

“That summer project got the ball rolling,” said Olsen, “but we soon realized there were dozens of other fascinating senior citizens in our vicinity, all great story-tellers and all with wonderful stories that tell us so much about ourselves and our unique local heritage and culture; but we knew we were not going to get time to record them all, no matter how hard we tried. So, with the help of Karen Filipkowski, our librarian here at the Madawaska Valley Public Library, we’ve put together a little contest with a $250 first prize for the best local history story-teller we can find over the coming winter.”

Olsen said an anonymous donor who is a big fan of local history, old-timer story-telling and the Stationkeepers’ recent efforts to energize area culture and heritage, offered to fund a $500 contest. “So, along with that $250 first prize, there will be another $250 worth of other prizes available,” added Olsen.  Contest rules and application forms are available through the MV Public Library website, by calling 613-756-2000, emailing admin@madawaskavalleylibrary.ca or visiting the library at 19474 Opeongo Line, Barry’s Bay.

“We’re not just offering contest money,” Olsen added. “The MV Public Library will also offer a series of free Zoom seminars to anyone who enters the contest, complete with professional tip sheets on recording techniques and broadcast-journalism strategies for oral history interviews, so that contestants can learn from some of the best. We’ll also provide a limited number of small, hand-held MP3 recording devices that can be borrowed from the library as week-long loans.”

“So, it doesn’t have to cost anybody anything but the time they spend with their favorite old-time story-teller,” said Olsen, “Then again,” she added, “if you already know how to listen to your grandparents and record them on a MP3 device – something you probably already have if you have a cellphone — sometimes it’s just best to let them tell their own story in their own way. No need to worry about being too journalistic! Other than [that] we expect all contestants to follow very carefully all recommended public health guidelines for Covid-19, especially when it comes to dealing with elderly loved-ones who might have underlying conditions.”

She said the contest is open to any local high school, college or university student within 50 kilometers of Barry’s Bay, who successfully records an MP3 interview with someone at least 65 years of age talking about the social history of the local area in the 20th Century. “It doesn’t even have to be about Barry’s Bay,” she said. “It could be about dancing the Lake Dore Waltz during the Dirty Thirties out Lake Dore way; it could be about rocking the night away in Rockingham during the Second World War; it could even be about fishing in Algonquin Park in the 1970s with Charlie Murray. So long as it’s a local eye-witness non-fiction story.”