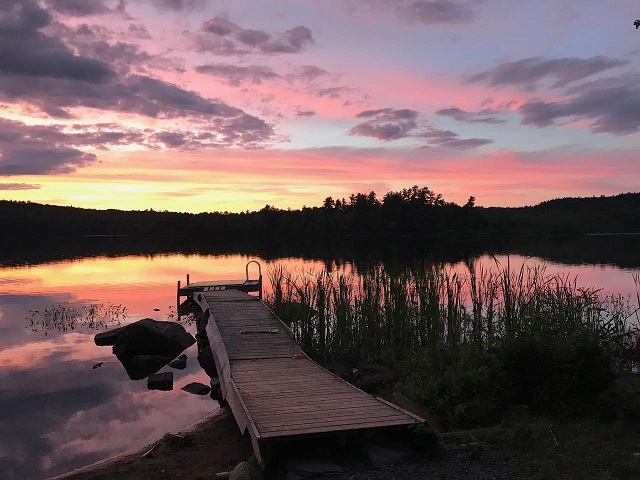 Where I come from, on the other side of Toronto, we are landlocked. Rivers flow through, but nothing stays. Even the people get in their cars by day, drive into the city to work, and return by night. A steady flow of traffic. Where I come from, humanity dominates.

We moved to a waterfront property in Barry’s Bay for the summer and now my life is all reflections, stillness, pools of glass. Animal sounds. The dark silhouette of a mountain undulating in pristine water. In the Madawaska Valley, nature abounds.

I swat the bug on my leg and toss it into the lake. Seconds later, a fish bobs up to gulp it down. That trick never gets old.

In June, when we arrived, the blackflies feasted behind the ears of my children, leaving their scars; then came the deerflies and the horseflies, which soon thinned out, and as I write this, sitting on the end of my dock, the mosquitos are like the hummingbirds I often see sucking at the sweet nectar of my flesh. But, without the bugs, what would the birds and the spiders and the fish eat? And without the fish, how would we tell stories about the fish that grow bigger each year? This summer, it’s the little fish that helped reel in the big fish we netted; next summer, it’s the big fish that caught the whale. We’re learning how to be fisherfolk (with a licence); how to be storytellers around the campfire (one hour before sunset until one hour before sunrise, when the burn ban is not in effect!), and to only take what we need, which isn’t much.

Now it’s August, and the wolves have returned from making their dens; their howls echo across the lake and never cease to thrill. We are borderline in cougar-country – there was a sighting of one reported on our road. Then there’s the busy bears: the cub that vandalized our neighbour’s shed, and those pedestrian bears I read about opening people’s car doors (don’t forget to lock!) And the deer. How commonplace the deer must become for those who live here, such are their numbers, but not so for the city dweller. A few pranced by right in front of me on my morning stroll with the dog and I was entranced. The deer are as magical as the forests they inhabit. The forests around here, with their draping hemlock, snow-white birch; red, white and jack pines painted by that famous group.

Algonquin Provincial Park is not far, and my goodness – how many folks are lucky enough to say that? There are twenty plus well-marked day use trails there – a hiker’s dream – not to mention Barry’s Bay has its own trail system nearby, the Thomas P. Murray Recreational Trails, good old Tom and his lookout, halfway to Combermere. Along those paths is as fine a place as any to be, by foot or on an ATV.

And the people, there are people here, though many of them are tucked away. They’re as kind as they are tough. I haven’t exactly experienced that toughness but to make it through the winter here – I see those stacks of wood – and I can imagine the bitter cold, the piles of snow. The people here are obviously made of granite (just look at the landscape), with hearts of gold. I have yet to ask someone for help and not receive two hands.

On my bike rides, more than anything, I have felt the hilly terrain. What goes down, must … go … up. But every time I make that climb, the view here, oh the view. Nothing beats it.

Except perhaps the sun setting over the water nestled into white pillows of fluffy clouds atop the pink bed of the sky. And the replication of that heavenly slumber scene reflected on the water’s surface. Symmetrical, divine.

When I leave Barry’s Bay at the end of the summer, I’ll remember the toads in my four-year-old’s hands, the deer stopping by to say hello, the warm hearts of those we met, the echo of the wolves’ howls to one another across the lake and I’ll have to ask myself – was it all a dream? The loon’s call will carry me back.

About the author: Adelle Purdham is a writer, teacher, speaker and advocate in the Down syndrome community. She’s the founder of The Write Retreat (coming to Madawaska Valley in fall 2021) and pursuing her MFA in creative nonfiction writing through the University of King’s College/Dalhousie. She mostly leaves frog catching to her three daughters and takes time to admire the view. Connect and follow her weekly blog posts at adellepurdham.ca