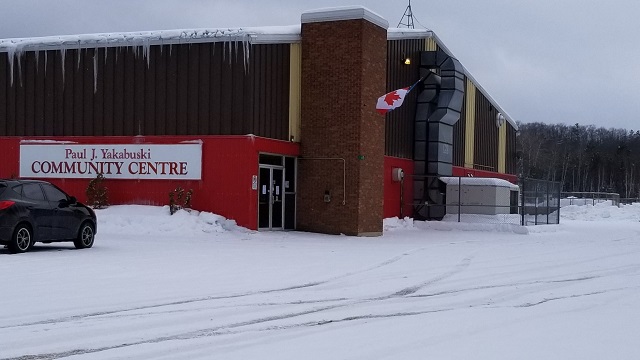 The setback to the future of the Paul J. Yakabuski Community Centre (PJYCC) caused by the recent rejection of a grant application to help pay for much needed repairs has once again brought into the forefront the issue of the cost/benefit of what has been described as a “White Elephant.”

At the September 22nd Special Council meeting which was held behind closed doors, a report was presented to Council by Stephanie Plebon, the Township’s Recreation & Community Development Coordinator. The report was prepared to assist Council in its deliberations on formulating a plan to deal with rehabilitation of the PJYCC, including urgent repairs. It noted that the grant project total cost was $2,077,811.99. The report contained a number of options ranging from only addressing the more urgent repairs and alterations, to carrying out all the work that was contemplated by the grant application. After the secret meeting, the Mayor stated, “We will be having further meetings on this issue. They will be public meetings. Once we receive the information back from the structural review which [it] is critically important that we get that completed first.”

The justification for calling the arena a “White Elephant” is easy to find because one only has to examine the Township’s historical financial statements. These show a consistent hemorrhaging of taxpayer money in order to keep its doors open. For example, from 2016 to date the arena has cost MV taxpayers $827,345.64 as a result of operating losses.

It is perhaps appropriate to look back to 2016 because it was in that year that saw the peak of the ugly, and infamous, attack on The Railway Station by two members of Council and their supporters, aided by a compliant mayor. See Mark Woermke’s article on the subject HERE.

In contrast to the arena’s financial drain, the “Barry’s Bay iconic visitor centre, museum and gallery,” as the Railway Station has been described, was not only contributing funds to its reserves on an annual basis, but also was proved to be contributing very substantial amounts to the local economy. This is because of what Councillor Mark Willmer described, referring to when he was “on council in Arnprior, it was generally recognized throughout Renfrew County that the Barry’s Bay visitors centre was far and away the busiest and most successful one around.” It achieved this through an innovative, and award-winning, combination of culture and tourism, and was thus recognized as being the “hub” of the Valley. This was acknowledged by three members of the current Council who when campaigning for office declared in answer to questions on The Current’s online Town Hall Forum that it was their intent to restore the Station to its former glory “not just as a visitor centre but as a vibrant, thriving, cultural centre.”

Sad to say there has been little evidence of any progress towards achieving this during this Council’s term to date, so it would appear that it remains off the agenda. Perhaps, therefore, it’s time to start looking at the arena with a blank sheet of paper, with a view to making it help fill the gap left by the Railway Station’s demise. This could be achieved by using the cavernous space to combine facilities for recreation including sports and fitness facilities, culture and even possibly as a means of providing more space for library facilities. A cost-effective plan for this purpose may well improve the chances of obtaining grant funding.

Regardless, taxpayers should ask whether it is fair for them to continue to carry the financial burden imposed by the arena, which will inevitably increase without any future grant funding or other source of financial support. This is a valid question when it largely only serves the mostly seasonal needs of skaters and hockey players, despite there being three outdoor rinks available in the Township. Yes, it is used for private functions of various kinds but this is not a major source of revenue by any means.

The Mayor stated that future discussions by Council on the subject will be public, although she did not say whether that meant public participation; something which The Current suggests is an imperative.